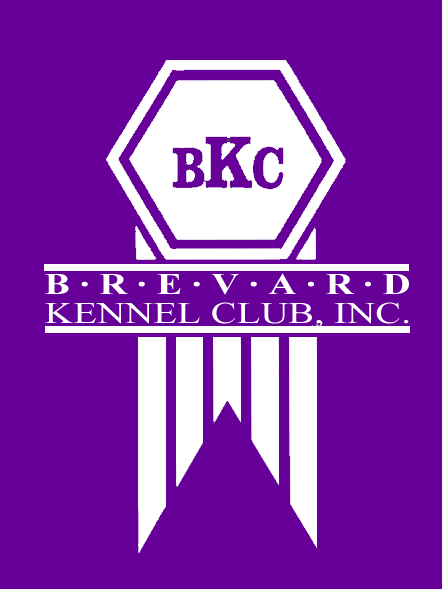 The BREVARD KENNEL CLUB, Inc., was formed in 1958 by a group of people interested in advancing the interests of purebred dogs and the welfare of animals in general by education, financial assistance to worthy animal related causes and the protection and encouragement of dogs and dog ownership.

Over a period of years, the club progressed through ever more demanding match shows. These events are the training ground of the dog fancy, giving the opportunity for puppies, neophyte handlers, aspiring judges and formative clubs to practice their several skills until they are ready to enter the big time - the AKC point show. The yearly show matches, currently held in April and December, are some of the standard community services, which the Brevard Kennel Club, Inc. provides.

Since being licensed by the American Kennel Club in 1973 to give AKC sanctioned point shows and obedience trials, the club has provided two such events each year. Currently the club holds shows in June and December in Orlando. The point show provides the opportunity for comparison of selected specimens of each recognized breed of dog. The purpose is to improve the breed by encouraging the identification of outstanding individual animals so that they can be used for promulgating the species.

The Brevard Kennel Club, Inc. also provides basic training for dogs and handlers in a weekly conformation class, currently held each Monday evening. This one-hour class prepares the young animal for the necessary routines required for the point show, including getting used to a variety of dogs and people in a less than tranquil setting. Classes are currently held at the Brevard County Dog Training Club on Merritt Island starting at 7:30 pm.

Public education is an important facet of the club's activities. Dog exhibitions, such as "Woof It Up" - Responsible Dog Ownership Day (RDO Day), enable the general public to get acquainted with types of dogs that they may not have previously seen and by talking with owners, to learn what type of dog would best suit their situation. Both general and specific information is available from a variety of sources. "Woof It Up" is typically held in autumn at the Riverfront Park in Cocoa Village.

The club also sponsors a yearly eye clinic which enables local breeders to have thier breeding stock tested for possible genetic problems at a reasonable cost since there is no local board certified ophthalmologist. This assists in producing better and healthier dogs by identifying those dogs who have problems and might transmit them to their off-spring.

Occasional seminars on more advanced subjects are provided for the serious dog-owner and the club's monthly meetings occasionally feature a program on one of the many aspects of dog ownership. Meetings are held on the first Wednesday of each month. Anyone who is interested in dogs is cordially invited.